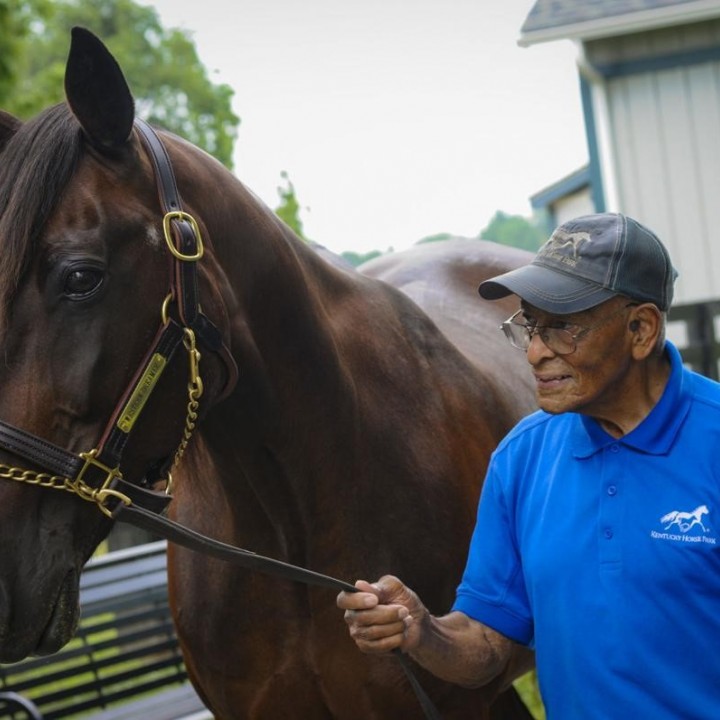 Eugene Carter, Jr., grew up in Maddoxtown, a small African American community north of Lexington, Kentucky. Freedmen settled the community after the Civil War.1 Most of the men living there either farmed or worked on one of the nearby horse farms. Despite his father being a tobacco farmer, Carter, known as “Rudy” in the community, chose working with horses.

Carter wanted to be a jockey. At 15, he persuaded his mother to let him forego the long bus ride to a segregated school in Lexington, and find a job with horses. In 1941, he landed work as an exercise rider at Elsmeade Farm when the assigned rider came late to work one too many times.2

In 1941 Carter broke yearlings for Cy White, who trained horses for the Ogden Phipps stable. White was the first of many trainers who called Carter a natural horseman.3

Carter gleaned some of his knowledge of horses while watching the legendary groomsman Will Harbut expertly handle the notoriously high-strung Man o’ War, also known as Big Red. Carter watched as Harbut talked to Man o’ War as he would a person.4 During one of his visits, Carter was fond of saying, Harbut allowed the young Carter to briefly sit astride the legendary champion. He said Harbut told him he was the last living person to do that.

The connection between Harbut and Big Red was so strong, the Thoroughbred lived only one month after Harbut fell ill and died. Carter also had another reason to visit Harbut on Faraway Farm: to get in the groom’s good graces and date his daughter, Lillian, a classmate. After serving in the Navy as a submariner during World War II, Carter married Lillian. Their marriage lasted 56 years.

In addition to White, Carter worked for:

In 1967, after exercising horses at Churchill Downs in Louisville, Kentucky, Davis asked Carter to return to Lexington and ride Royal Matter in the second running of the High Hope Steeplechase. Carter had always wanted to be a jockey, but many states refused to license African American jockeys at that time because of segregation laws.

Carter’s family was forced to stand outside the track because of Jim Crow laws. They were waiting to take him home at the end of a long work day. As the horses raced, Carter’s family noticed he was onboard Royal Matter and in the lead. They witnessed Carter winning his only race.5

After that winning ride, Carter returned to his job conditioning horses rather than guiding them across the finish line. He exercised Davis’ Annihilate ‘Em, a horse he also broke as a yearling, for the 1973 Travers Stakes at Saratoga. He led the Thoroughbred to the post and handed the reins to jockey Ron Turrcote who rode the horse to victory.

After Davis died in 1976, Carter worked on Saxony Farm for the next 25 years, where he broke yearlings and led some to the sales ring for owner Bruce Hundley. He retired in 2002.

When Carter’s wife died in 2003, he looked for something to do to take his mind off his loss. He found seasonal work at the Kentucky Horse Park Hall of Champions, working with retired race horses such as Cigar, John Henry, Funny Cide and others.6 He regaled visitors for fourteen years with stories of famous horses and, of course, how he was the last living person to sit on Man o’ War. He died at age 93, the father of nine children, and possessing at least one deferred dream that came true.

When citing this article as a source in Chicago

Manual of Style use this format: Last name, first name of Author. Chronicle of African Americans in the Horse Industry. n.d. “Title of Profile or Story.” International Museum of the Horse. Accessed date. URL of page cited.